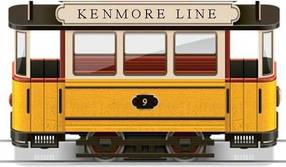 In 1887 a new form of transportation was introduced that would begin a new era of transportation by horse drawn streetcar. By 1890, the electric streetcar, also called a trolley, enabled transportation lines to be extended, thus fostering a tremendous amount of suburban development.  The founder of our Village, Louis P.A. Eberhardt, purchased farm land in 1888 near a trolley line north of Buffalo; chances are he wouldn’t have purchased the land if the trolley line hadn’t been an apparent part of the future of the area. The trolleys enabled people to cut travel time greatly, making it much easier to live farther away from the city center where most of the jobs were located.  Trolleys offered low fares and land farther from the city was less expensive to purchase, this meant that commuting was then affordable for many people.  Communities began to grow along the trolley lines throughout the United States,  these communities are called streetcar or Trolley Suburbs.

Grocery stores, bakeries, shoe repair and other types of shops were built along the trolley line providing convenience for these new suburban residents. The houses were built primarily on streets coming off the trolley line and set back from it. This represented the beginning of a distinct separation between commercial and residential areas in communities that hadn‘t existed to that extent before.  Many classic Trolley Suburb traits like separate commercial and residential districts are apparent in Kenmore today and our Village has treed sidewalks that were designed to make travel easy; one could exit the Trolley, stop for some groceries, then walk home. The Village was designed to be user friendly, comfortable and attractive.

The Village of Kenmore is a classic example of a Trolley Suburb. The houses that were built in Trolley Suburbs were often Bungalow and Foursquare types. Many of the houses were actually purchased by catalogue with most of the materials arriving by railcar.  If you look at the support eaves exposed in some Kenmore roof lines, you will notice that many possess pieced rafters from being built from a catalogue kit.  Many of the houses built then were placed close together and had prominent front porches while driveways and garages were rare.  Trees were planted along sidewalks and street lamps lined the avenues; this created a very pedestrian friendly community that enabled residents to enjoy a quality of life that was convenient, pleasant, and affordable.  Throughout the 20th century, many U. S. cities and suburbs grew in a piecemeal fashion, without any real plan for future development, but Trolley Suburbs like Kenmore were highly planned and successful communities that are once more being used as a new community model.

Trolley service in Kenmore began in 1898 and ended on June 19, 1950. The Kenmore Car Line had a Peter Witt designed trolley –we were route #9.  The KVIS is working to help educate our community about our identity as a Trolley Suburb; we believe that this aspect of our beginning days together positively affects our present and future.  We continually seek ways in which this cherished part of our identity may be developed, embraced, and fostered with pride; after all, without the Trolley we may not have been the first suburb of Buffalo.

If you have an idea about how we can continue to enhance our identity as a Trolley Suburb, please contact the KVIS and consider joining the Historic Kenmore Committee.